Written by Niki Kohari
Updated over a week ago

By default, all new members of Organizations have Org Member permissions. These can be changed by an Org Admin in the Org Settings menu.

There are four different roles within Retrium. Each role has different permissions, which affect what that user can see and do both within the Team Rooms and your Organization. 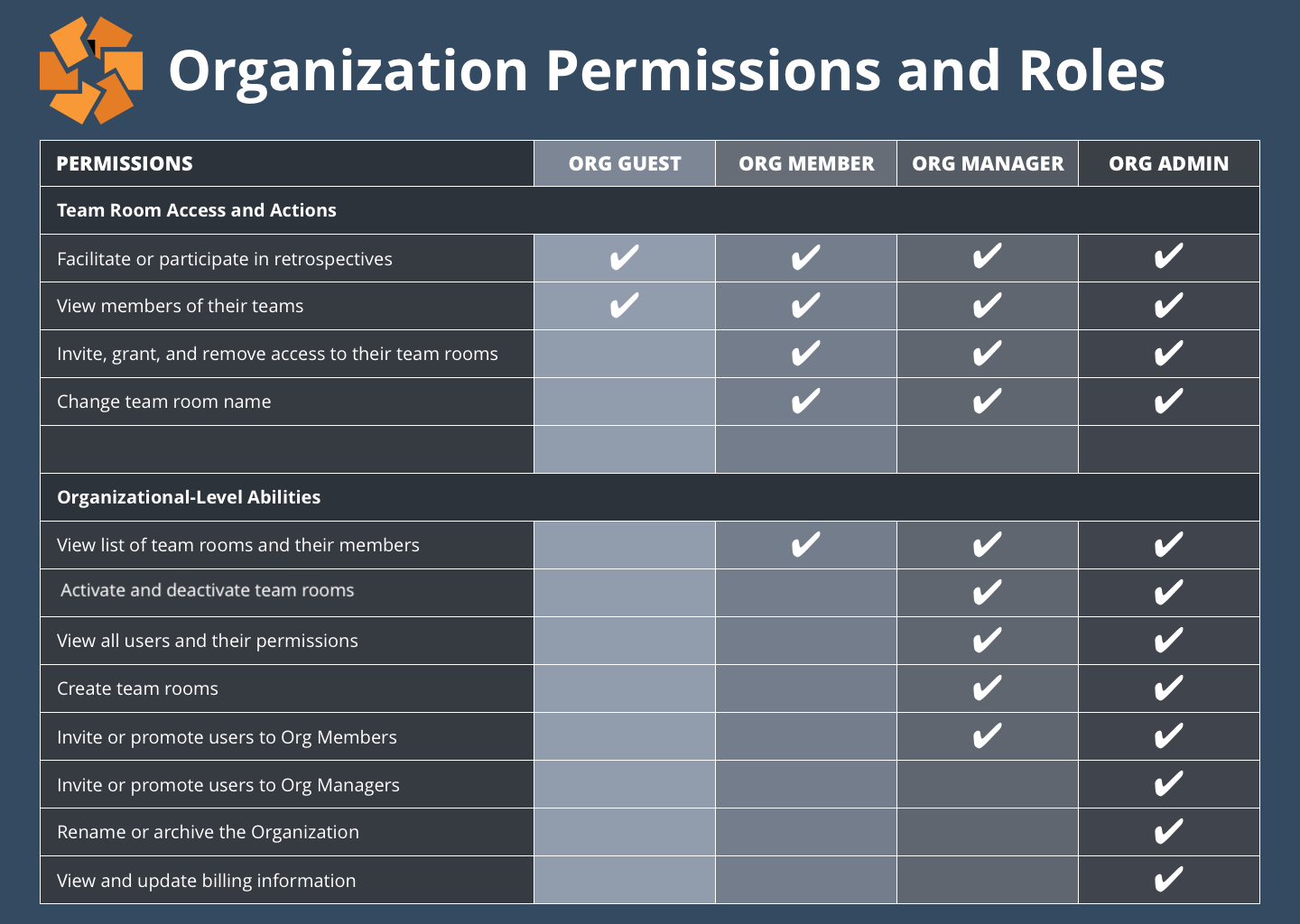 The most restrictive role - Org Guests can facilitate or participate in retrospectives, and can only view Team Rooms and members of Team Rooms they were invited to join.

An Org Guest is the most restrictive role and anyone with this option has limited permissions within the Retrium application. The Org Guest role is great for contractors, short-term employees, or others that should only participate in a single or small number of Team Rooms.

Those who are given this role do not have visibility into anything for which they were not invited and cannot see Team Room names they do not belong to. Additionally, they cannot authorize others to be part of a Team Room or change any Team Room settings, such as the Team Room name. If you do not want people to grant access for others to join a Team Room, please ensure they have Org Guest permissions.

Those with this role have no ability to make changes to the Organization settings, and do not have access to view any of this information. When in doubt, it's best to set someone to Org Guest permissions after you invite them, especially if they are not an employee of your company.

The default and most common role - Can facilitate or participate in retrospectives, can view all Team Rooms in an Organization and invite or remove others from their Team Rooms. We recommend you use this role for the majority of users in your Organization.

An Org Member is the default setting when adding someone new to your Team Room or Organization. This role has no ability to manage any Organization settings related to billing (such as adding team rooms or updating credit card details), but can see a list of everyone in the Organization and their permissions.

An Org Member is likely the best role for individual contributors and retrospective participants. In addition to being able to facilitate or participate in retrospectives, they also have more control over the administration of their Team Rooms. Unlike Org Guests, they can invite others to the Team Room and rename it.

With this role, Org Members will also be able to see the names of all the Team Rooms in the company and even request access if they need to join a specific team. This additional visibility helps them understand who else is using Retrium and gain membership to the right Team Rooms quickly.

The main reason to have this level of permission is the ability to create new Team Rooms within the Organization. This role is often granted to Agile Coaches, ScrumMasters, or Managers within companies who need to be able to start up new teams of people quickly. This role can also deactivate or reactivate Team Rooms.

**Because billing is based on the number of active Team Rooms in a billing cycle, those with this permission will be able to increase the monthly or yearly cost of your subscription.

Lastly, an Org Administrator can do anything the other roles in your Organization can do, including running retrospectives, changing the settings or members of Team Rooms, viewing all the Team Rooms and users within the company, changing role and permissions for others, and adding new Team Rooms (which may affect the monthly or yearly cost of Retrium).

Those with this role also have the ability to make changes to Organization settings. They can rename an Organization and make changes to credit card (or invoice) billing information. Often times, Org Admins are restricted to the person interested in procuring Retrium and a few other leaders within your company, such as an IT department manager or an Accounts Payable contact.

Did this answer your question?